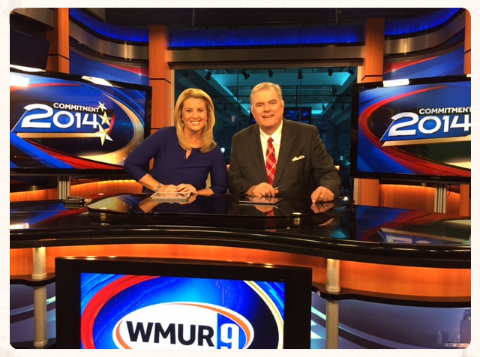 Passed through New Hampshire lately?  If so, we're already old friends.  I've had the honor of anchoring the news at WMUR-TV, since 1997, earning several Emmy nominations, the Red Cross Sword of Hope Award, and contributing to coverage that has been recognized with an Edward R. Murrow Award, Associated Press honors, and multiple NH Association of Broadcasters commendations.  As part of our extensive presidential primary coverage, I've had roles in internationally televised presidential debates alongside CNN, ABC News, and Fox News, and have conducted one-on-one interviews with sitting presidents of the United States of America, and every presidential candidate who crosses the NH border.  I've ventured to Houston, Texas, to interview President George H.W. Bush, and his wife, Barbara, and been dispatched to Arizona, to cover the New England Patriots in Super Bowl XXll.  When ABC's Extreme Home Makeover rolled into New Hampshire, I was there live when a local family saw their new home for the first time.  Nearly two decades on the anchor desk, and there have been so many unforgettable images of both tragedy and triumph, catastrophic events and acts of heroism.  It has been a journey, and a privilege.

I released my debut novel, Last Flight Out, in 2011.  A mix of family crisis and politics, all proceeds from this book were directed to New Hampshire breast cancer charities.  Thank you to everyone who supported this critical cause.  My second novel, Throw Away Girls, is coming in July of 2016!  Readers will meet LA reporter Jaycee Wilder, as she goes deep into the Los Angeles nightclub scene to snuff out a serial killer.  Expect to see more of Jaycee in future releases.  And stand by for Echo Valley, a story that blends small town New Hampshire with the intensity and scandal of a presidential campaign.

My most important job of all: mom.  Alongside my husband, Brad Dupuis, I'm joyfully raising two great kids, and our cocker spaniel, Fletcher, who are the heart and soul of my entire life.  Brody and Darby fill us with pride and hope for a future full of promise and love.  My best accomplishments, by far.